10 Social Media Fails That Haunt Us

What scares a digital marketing agency more than anything?

Social media has the ability to launch companies…or end them. The nature of social media being so public means that anything you post has the potential to be seen by thousands of people. Great when things are going well, not so great when you screw up.

Companies and agencies have a responsibility to create content that’s thoughtful, self-aware, and socially aware. Social media is where many companies do the bulk of their customer interaction, and they have the opportunity to brand-build through public-facing interactions. That's why it's so important for brands to get it right.

Digital marketing agencies love for our brands to have a social media presence that’s thoughtful, genuine, and has personality, and we want our brands to avoid missteps like these.

So in honor of spooky season, we compiled a list of the scariest social media mess-ups to date. Check it out and let us know if you have one to add to our list.

There have been endless social media fails over the years - the pressure for brands to move fast and enter into a national conversation can push them to produce ill-advised content. A lack of diversity in groups who produce content, or a lack of willingness to think through how content can affect people, also can lead to these errors.

Digital marketing agencies aren't exempt from making these fails ourselves, but we like to think we at least have the experience to avoid these fails and push brands to be better.

Chase Bank’s #MondayMotivation tweet about why people can’t save money. 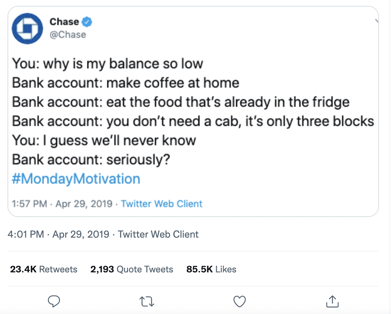 Probably best to stay in your lane on this one, giant bank.  The poem saw lots of pushback, with Senator Elizabeth Warren tweeting back about the bank's practices and history. 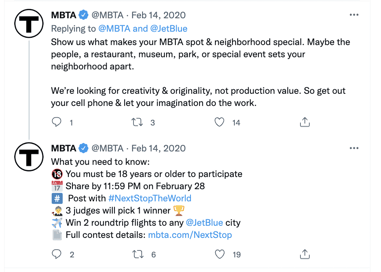 MBTA riders weren't having it and responded with their grievances about the MBTA instead.

Sometimes, engagement campaigns aren’t the best move for your brand.

A classic example of poorly inserting yourself into a conversation without listening first. Dominos pulled the campaign after receiving online backlash.

Going forward, it’s best to avoid using death to endorse your brand, no matter how clever you think your pun is.

Some brands make giant flops on social media, and others make tiny flops that only marketers like us fear to our core.

These classic social media mistakes often happen when brands are inexperienced at social media. They might not generate the bad PR of the major fails, but they do seriously harm your marketing efforts.

For our last three social media nightmares, here are some geography-specific fails that were really not a good look for these brands.

Chick-fil-a was confused about Alaska

In 2018, a customer asked Chick-fil-a when they were expanding to Alaska and the company responded that didn’t have plans to expand beyond North America at the time. 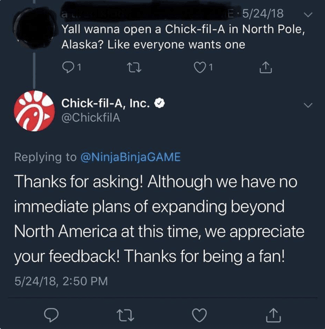 There are a few terms that refer to the US sans Alaska, but none of those terms are "North America."

In 2014, Delta chose to celebrate the United State's win vs Ghana in a World Cup match by tweeting a picture of the Statue of Liberty next to a picture of a giraffe. 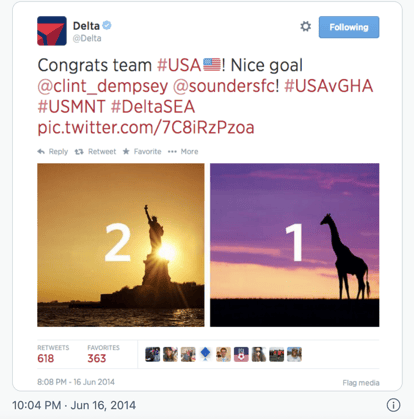 Giraffes don't live in Ghana. This is why it's important to do your research before posting. Double, triple, quadruple check your facts. And don’t make racist assumptions especially when it’s about an entire continent made up of different countries and cultures and ecosystems.

And finally, during the 2018 Olympics in Pyeongchang, South Korea, a TV station used a graphic that said “P.F. Chang’s” aka the name of a Chinese restaurant chain. While this didn't originally happen on social media, it drew widespread attention and criticism on social media. 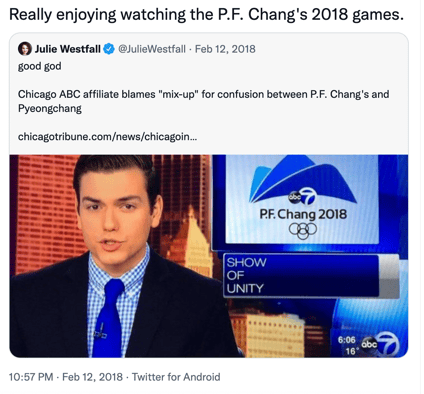 How to Do Better on Social Media

So how can a company avoid stepping into a social media nightmare? Do your homework, be genuine, and don’t try to jump on the bandwagon of every trend just because you feel like you have to be in the conversation. Not every brand needs to be in every conversation all the time, especially if you have nothing genuine to say. Being edgy or controversial just for the sake of it isn’t always the right strategy. Avoid greenwashing and woke-washing and make sure you listen before you post.

That’s why working with a digital marketing agency is a great idea when it comes to social media. Agencies have seen it all and can help you avoid making serious social media mistakes.

Newsroom
How Organizations Can Cut Through The Social Media Noise
January 26, 2021
Newsroom
What The Merging Of Retail And Digital Media Means For Your Brand
September 29, 2021
Blogs
Social Media Convergence: How Marketers Can Adapt
September 28, 2022

News, Views, and Valuable Resources
Delivered to Your Inbox Each Week

LET’S TALK
Get in touch